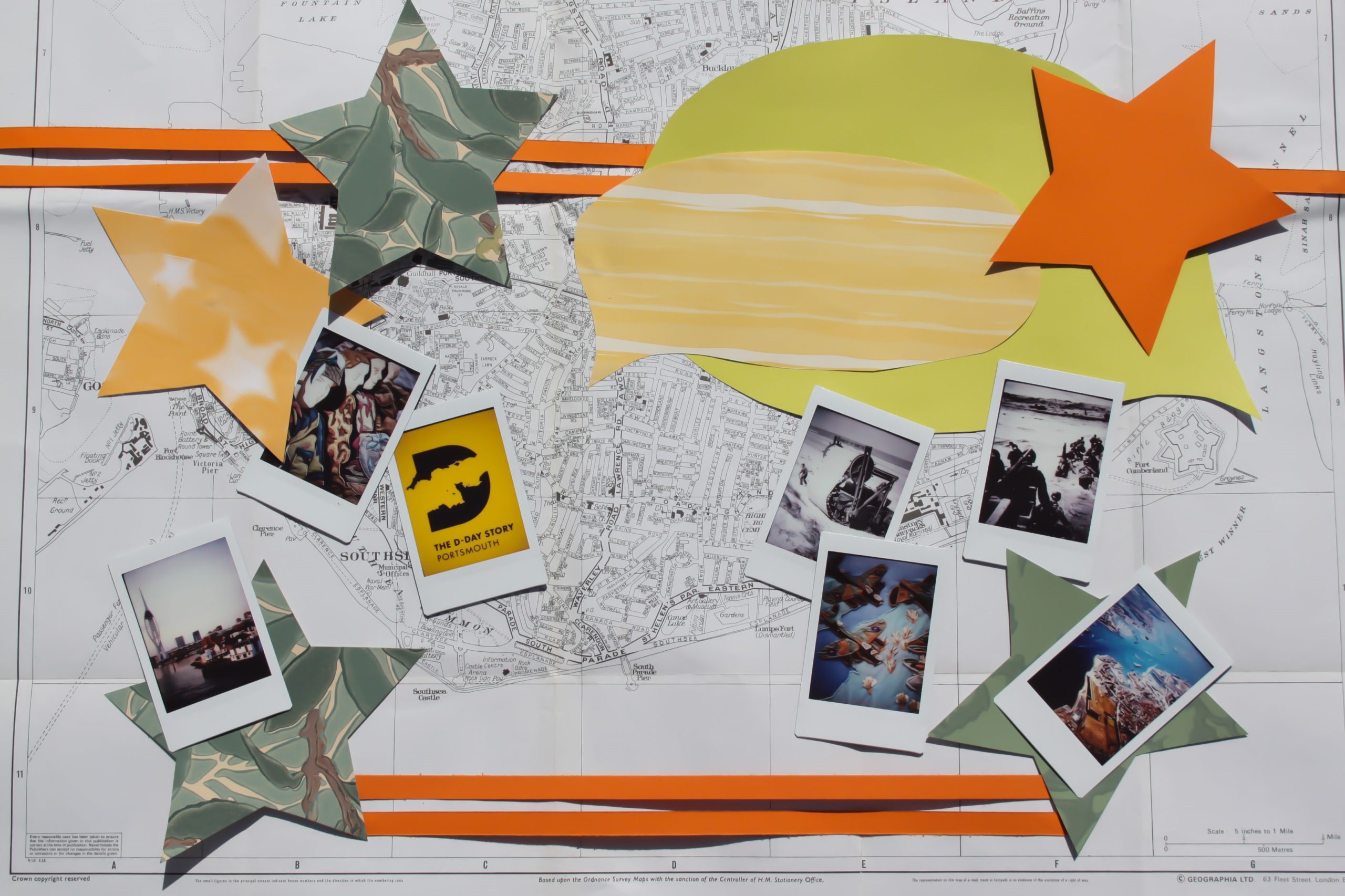 The D-Day Story is working with artist Becky Vincer to create a community story map connecting people and local stories about D-Day and Portsmouth.
The story map will feature designs, doodles and photographs shared by people in Portsmouth.
Becky is now working on the final designs of the map but thank you to everyone who took part.  Watch this space for the final design of the map we plan to launch later in the year.
You may want to create your own story map, feel free to use the activities below to inspire your creation.

People in Portsmouth said before D-Day “We knew something was happening”. On the morning of 5 June 1944 soldiers walked down through Portsmouth to board ships to go to France. They would have walked the streets you walk today to get to Clarence Pier, South Parade Pier and the hard. Draw around your foot and decorate it for the map.
Your foot might be used to mark the walking route on the map.

It was not just men who travelled to D-Day, ships also carried tanks and supplies. Ships were specially made for D-Day, including Landing Craft Tanks which could carry up to ten tanks. Landing Craft Tank 7074, the last surviving ship of its kind from D-Day will be next to The D-Day Story later this year. The two tanks once outside the museum will be on board the ship. Can you draw a tank in this space?

When landing in France for D-Day, soldiers had to do their best to merge in to the background. Often they would use patterns to cause confusion, this is called camouflage. Can you fill this space with a pattern?
Remember sailors, soldiers and airmen had to travel by land, sea and air to liberate Europe. Your pattern could be used to show the sea/sand/roads/grass/paths on the map we are creating.

The D-Day Story continues to tell the story of D-Day. There are many stories told through objects donated by people. The museum first opened in 1984.  Head to the museum’s Collections pages, find a story, fact or object that interests you. Draw it and tell us what you found out about the object.

This project is funded by the National Lottery Heritage Fund, working in partnership with the National Museum of the Royal Navy and Portsmouth Walking for Health, as part of the Landing Craft Tank 7074 project.

Take a look at the videos below for further information. The first gives details about the project:

Now, find out about how to share your D-Day Story: