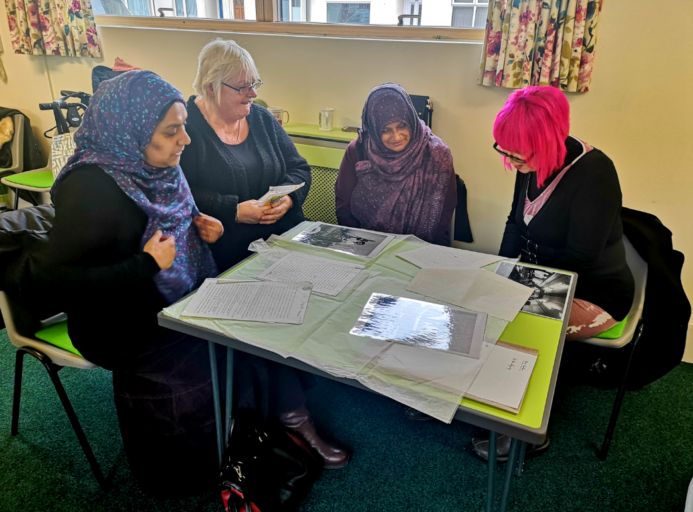 Chat over chai carrying out research

Chat over chai carrying out research

Chat Over Chai is a Portsmouth-based social group that meets for a chat and fun activities. The group mainly works with people from Black, Asian Minority Ethnic and Refugee (BAMER) communities across Portsmouth.

During our first brainstorming session, the group had a good look around The D-Day Story and met John Jenkins, a 99-year-old D-Day veteran. Everyone felt very privileged to have been able to talk to him and ask him questions about his time during the war. At the end of the session we all came to an agreement on what we wanted to research. The group were really interested in researching their own D-Day heritage, so it was suggested to us that perhaps we could look at the role of Indian services during the Second World War.

After talking with the National Museum of the Royal Navy, we came across the WRINs (Women’s Royal Indian Navy). During the Second World War, with the threat of a Japanese invasion of India looming, the WRINs helped the Royal Indian Navy run bases from Karachi to Cochin. Their British counterparts, The WRNs (Women’s Royal Navy) played a huge part in the D-Day preparations, especially in Portsmouth. Both groups of women played a big role in the war effort, and allowed women in both countries to experience new freedoms. So it was decided the group’s research would compare and contrast the two groups.

The first research session focused on the WRNs and finding out who these British women were and what they did. We looked through a whole range of archive material, from personal hand written accounts from the WRNs themselves, to photographs and even some uniform. We found out lots of information about their work, social life and even the blackout pants that they used to have to wear!

The next session was hosted by the National Museum of the Royal Navy. They have a very rare album which was given to Chief Officer Cooper, a WRIN officer. This gave us lots of information on the WRINs. They also gave us some great ideas of what we might do with all our research. But we’ll keep that as a surprise.

So the next step is to gather all the information we have together and really compare these two groups of women. Then we will channel this into our final piece to showcase our research.

Seeing our work on display – a great feeling