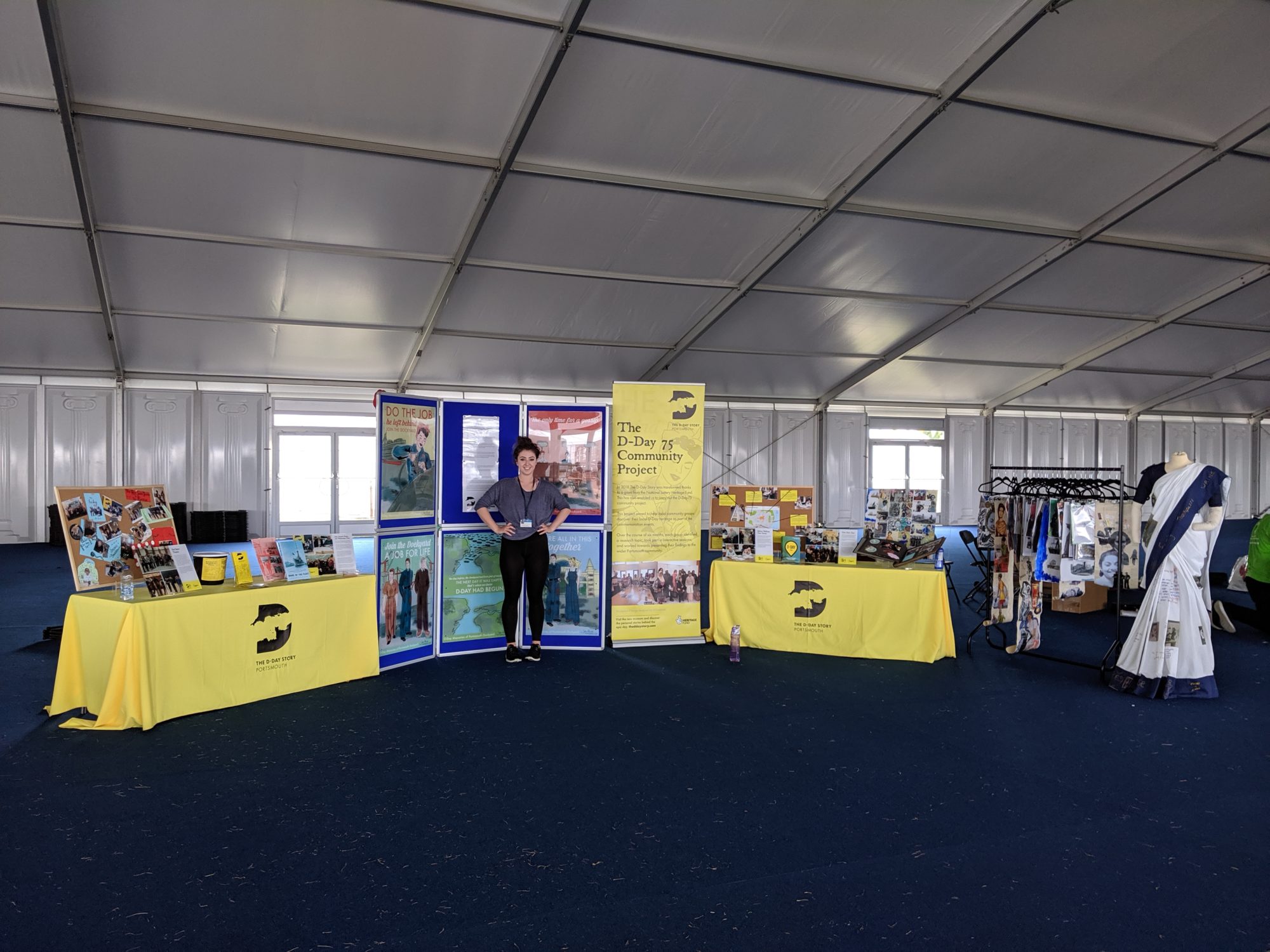 Emma with the Community Group displays at D-Day 75

Emma with the Community Group displays at D-Day 75

So the time has come to write my final blog. Over the past two months I have been running the last few sessions with all of the groups and working towards showcasing all of their work for the 75th D-Day anniversary in June.

In April and May every group was putting in the last bit of effort to get everything finished. Red Sauce were running through their performance and perfecting it for the stage. Milton community group were working with Nigel Kellaway to put their research into a leaflet format, ready to print. Chat over Chai were finishing their sari and art work. And finally the John Pounds Clubs were doing the last bits of recording for their oral history documentary film, and giving feedback on the Dockyard posters, ready for a last minute redraft and print.

We did have time for one last trip, so in May the groups had a great visit to the National Army Museum. The museum was extremely accommodating and the groups had such a good time they wanted to stay longer!

Before we knew it, it was June. And that meant one thing… D-Day! On the 8th and 9th of June I took the groups’ work to Southsea common to showcase it, as part of the D-Day 75 celebration events. The feedback from the public was so positive:
“The project looks fantastic.”
“So brilliant to get the local community involved in D-Day.”

But the best part was seeing the group’s faces when they saw their work on display. They worked so hard on all of the outcomes, so it meant a great deal to have them see the finished result displayed to the public.

After being shown on the common, the groups’ work went on display at The D-Day Story. This just left us just enough time to celebrate the end of the project together. On the 20th of June we had a celebratory event at Spinnaker Tower. It gave the groups a chance to get together, catch up and celebrate all their hard work with the Mayor and Mayoress of Portsmouth.

The most rewarding thing about leading this project is seeing how much the groups have grown in confidence and enjoyed themselves. Every single one has learnt something new or developed a new skill that they didn’t have before and that’s a really valuable legacy to leave behind.

The hardest part about finishing this project and moving on will be not seeing the community groups for our monthly sessions. We have formed some great friendships and I hope that they will feel welcome to pop back into the museum anytime. The D-Day Story will be continuing its work with the local Portsmouth community in different ways, and I am very thankful to have been able to deliver such a beneficial project for all those involved.

We’ve had a busy few months!