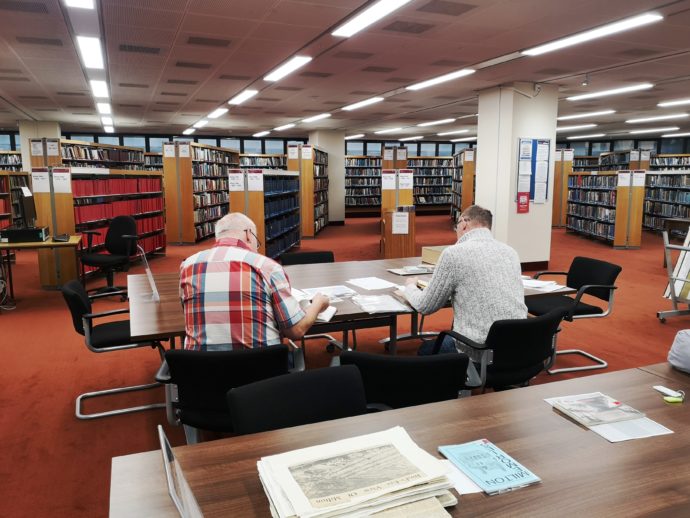 The Milton Walking Tour Group is a small team pulling together a picture of life to the east of Portsmouth before the war, how it changed when the war arrived, how individual lives were affected, and how local people were involved in the response – culminating in the D-Day landings. We aim to put together a D-Day-themed walking tour of the Milton and Eastney area called A Portsmouth D-Day Walk around Milton & Eastney.

For a newly developed suburb on the outskirts of Portsmouth, it is surprising how much D-Day heritage we have here. The Horsa gliders used throughout the war and to great effect as part of the D-Day landings where made by Airspeed, many in the White & Newton furniture factory in Milton – which they took over for the duration of the war.

The floating concrete pontoons used to make temporary harbours during the D-Day landings were known as Mulberry Harbours, and many were made on the shores of Hayling beach directly opposite Milton and Eastney. One, which broke away when it was being towed to the Normandy beaches, is still visible from Milton Locks sitting on the mud in Langstone Harbour – a lasting reminder of how greatly affected the local area was during the war.

The decoy installations in Langstone Harbour designed to fool Luftwaffe pilots that they were flying over the Dockyard have long since gone, but much still exists as you walk through the area – not least the hospitals where so many waiting for D-Day were billeted, and the graves of some of those who bravely gave their lives in the assault.

Pulling together materials and evidence to annotate a walk around some of these highlights is a significant challenge and, whilst general information can be found with simple web searches, the resources of Portsmouth Museums and the History Centre have proved invaluable – though it is the staff who have helped us find details we never suspected would still exist to whom we are most grateful.

Knowing that a bomb dropped somewhere in Dunbar Rd, Milton during the war is one thing – it is not hard to spot the 3 ‘newer houses’ where it must have been. A little local research tells you the bomb hit on the 14th June 1942.  But without the museums team we would never have found the handwritten reports of all of the ARP, police, ambulance and other crews who attended during the night: the unfortunately matter-of-fact reports of the couple found dead, the call for a mortuary van, the ambulances for the surviving casualties, the confusion that resulted in a 2nd fire crew being called even though they were not needed… All of this detail is what makes the stories of Portsmouth real and which we would never have found without the help and support of the museums team.

Over the next few months we will be continuing our research and pulling all of it together into a tour, ready to be unveiled at the June commemoration events.

How the war effort changed life in Britain