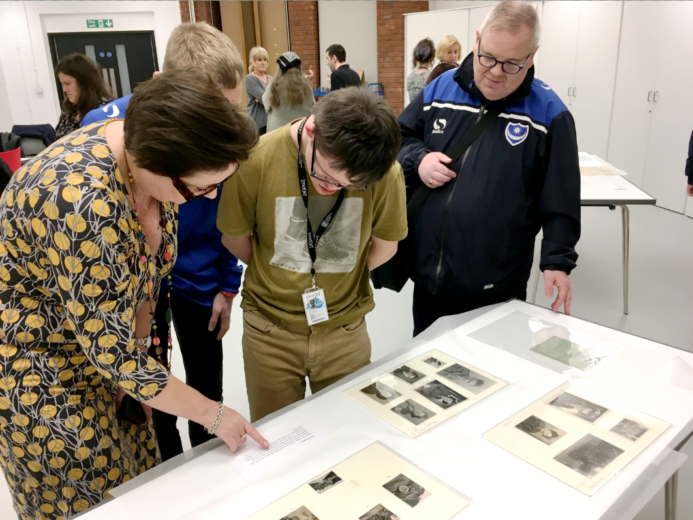 Red Sauce Theatre Company is a unique and contemporary performance art company, with a diverse cast with a variety of creative skills.

The company offers an open-door policy from working actors to first timers and is associated at The New Theatre Royal in Portsmouth.

Red Sauce works alongside community groups to give them the opportunity to rehearse and perform in professional productions; learning new skills, gaining confidence and building friendships on the way.

As part of the D-Day 75 commemorations this summer, we will be delivering performances around Portsmouth, inspired by our research with The D-Day Story.  We are working alongside ‘The Extras’, a new and exciting drama group for adults with additional needs and/or a learning disability, held at The New Theatre Royal Portsmouth.

We decided that our research for this project would focus on looking at letters and artefacts that ‘ordinary’ Portsmouth people collected and received during the time of D-Day. Portsmouth became a large embarkation point for D-Day, so there were many troops stationed in Portsmouth waiting to leave for Normandy.

Local families were encouraged to invite troops into their homes for meals and baths, if they were able to. As such, some families continued to write to these men and their families after they left for Normandy.

Rehearsals are currently underway, to interpret the letters sent by the soldiers in France to their loved ones in Portsmouth using drama, music, art and video.

Our thanks go to the staff at The D-Day Story for their help and support during our project, we have learnt so much about our own heritage and about our wonderful city.

We will be performing our final piece on:

We are also hoping to be performing on Wednesday 5th June at Castle Fields Portsmouth.

The big day is less than seven weeks away…